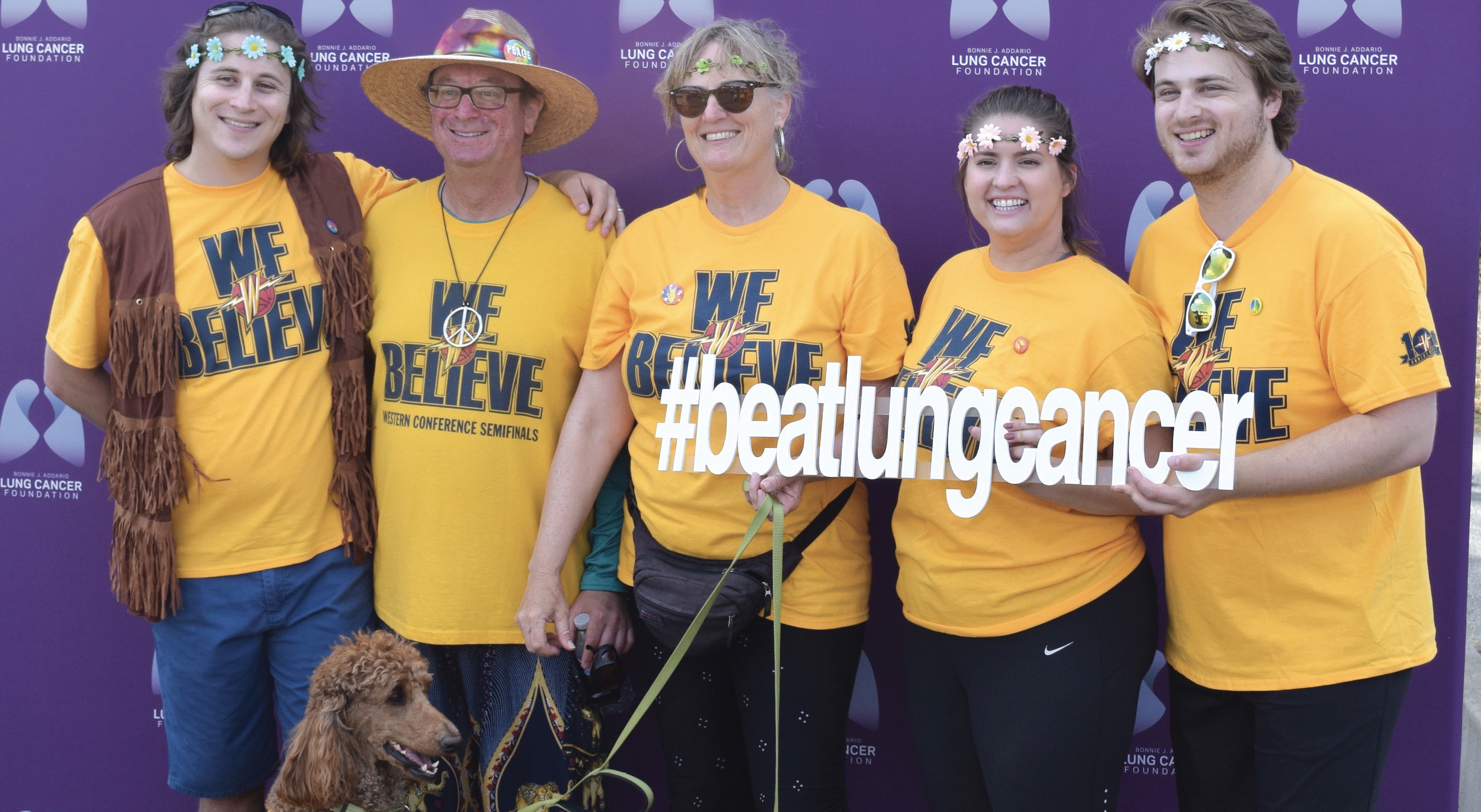 DAVE KARLIN (second from left) celebrates with his family at the Bonnie J. Addario Lung Walk/Run event in September at Lake Merced in San Francisco.

The word “lucky” isn’t generally associated with a stage 4 cancer diagnosis. But Dave Karlin knows that in his case it applies.

Karlin, 60, of Belmont, California, was diagnosed in March 2017 with stage 4 non-small cell lung cancer (NSCLC). He is among the 10 to 15 percent of patients with NSCLC who test positive for a mutation in the epidermal growth factor receptor (EGFR) gene, which provides instructions for making a receptor protein found on the surface of certain cells, including cancer cells, that causes them to grow and divide. The mutation makes him a candidate for targeted therapy, an emerging class of drugs that focus on blocking cancer’s growth at the cellular level.

“I got a call from my oncologist, saying I was EGFR-positive,” Karlin recalls. “She told me I was in the ‘lucky 10 percent’ and that my cancer could be treated with Tarceva (erlotinib).”

Karlin has adenocarcinoma, a type of NSCLC that begins in the cells that line the alveoli, tiny air sacs inside the lungs. Other main types include squamous cell carcinoma and large cell carcinoma, in addition to rarer types such as pleomorphic, carcinoid tumor, salivary gland carcinoma and unclassified carcinoma. How NSCLC is treated and whether targeted therapy is an option depend on the type and how advanced the cancer is.

“Targeted therapy has revolutionized how lung cancer is treated,” says Roy Herbst, M.D., Ph.D., professor of medicine, professor of pharmacology and chief of medical oncology at Yale Cancer Center and Smilow Cancer Hospital in New Haven, Connecticut. “It’s extraordinary. We’ve gone from ‘one therapy fits all’ to precise treatments based on molecular profiling.”

When NSCLC is diagnosed, oncologists stage the cancer to determine if it has metastasized to other parts of the patient’s body and the best course of treatment, including surgical options and more traditional treatments, such as chemotherapy and radiation.

But oncologists also use testing known as molecular profiling to look for particular genetic arrangements that can be targeted during treatment. There are four different genetic signatures for which the Food and Drug Administration has approved targeted therapies for use in lung cancer: EGFR, ALK, ROS1 and BRAF.

Guidelines recommend genetic testing in patients with nonsquamous NSCLC, says Geoffrey Oxnard, M.D., thoracic oncologist at Dana-Farber Cancer Institute and an assistant professor of medicine at Harvard Medical School, both in Boston. “If you find a mutation, there are treatment options,” he says.

It’s important for patients to realize that there’s a difference between a person’s inherited genes and their tumor genetics, Oxnard says. Molecular profiling of a tumor is about understanding what makes the cancer think. “It doesn’t tell us why the patient got lung cancer,” says Oxnard.

Treatment for lung cancer varies by disease stage, but for patients with genetic mutations, targeted therapy is used as a first-line treatment. “In some lung cancers, we see particular mutations that are acquired, and we have developed excellent inhibitors that target the proteins affected by mutations,” says Jyoti Patel, M.D., professor in the department of medicine and director of thoracic oncology at the University of Chicago Medicine. “We see dramatic and durable responses in patients.”

Approximately 5 percent of patients with NSCLC have ALK mutations. Most recently, the Food and Drug Administration approved Alecensa to treat patients with ALK-positive metastatic NSCLC in the frontline. Results of the phase 3 ALEX study showed that compared with Xalkori, Alecensa improved progression-free survival by 47 percent.

In addition to ALK, mutations in BRAF or ROS1 are experienced by 1 to 2 percent of patients, Patel says, adding that the majority of patients with targetable mutations have adenocarcinoma, the most common kind of NSCLC. “We know far less about mutations that cause squamous cell cancer to grow,” she says.

Molecular profiling can be a vital first step toward getting the right treatment. “If you have a mutation, you will do better if you have one of these inhibitors instead of chemotherapy,” says Patel. “Targeted therapies improve outcomes and overall survival. They can cause tumor regression, often within weeks. Patients can live more normal lives.”

Oxnard agrees. “If a patient has a mutation, pill therapy with an EGFR inhibitor is better than chemotherapy. There are less side effects,” he says. That’s been Karlin’s experience.

“In some ways, I feel better than I have in years,” Karlin says. However, he has experienced some of the common side effects seen with targeted therapy drugs, such as a facial rash, fatigue and a sensitive stomach. Diarrhea is also a common side effect of targeted therapies, and patients using ALK inhibitors sometimes have leg swelling, Patel says.

“These drugs hit cancer at its most vulnerable point without hitting the body,” says Oxnard.

For Karlin, Tarceva’s side effects are usually manageable, he says. “Chemotherapy and radiation is the image we have of cancer,” he says. “If the cancer doesn’t kill you, the treatment will. As long as the Tarceva is effective, I’ll be on it.”

Targeted therapy does have drawbacks. For instance, cancer cells can become resistant to them.

“These drugs are quite specific, and cancer can often outwit them,” says Patel. “It’s important for people to consider what’s next when they are on targeted therapy.”

But in April 2014, Hiznay’s cancer came back. After two months of radiation, his doctor again treated him with Xalkori.

That controlled the disease until April 2015, when he entered a phase 1 clinical trial of lorlatinib, a third-generation ALK inhibitor, which he continues to take.

“Some people have a diabetes pill once a day,” he says. “I have a cancer pill.”

Resistance is on Karlin’s mind, too.

“I’ve met people who’ve been on Tarceva for three years, six years, but cancers can mutate,” he says. “That cancer cell wants to stay alive and keep progressing.

Immunotherapy is a class of drugs that boost the body’s natural defenses to fight cancer by interfering with how cancer cells grow and spread. About onethird of patients with NSCLC have high levels of a biomarker known as PD-L1, indicating that an immunotherapy drug, such as Keytruda (pembrolizumab), would be appropriate, Oxnard says.

For patients with ALK mutations, Zykadia, Alecensa and Alunbrig are approved as second-line treatments for those who have developed resistance to Xalkori, says Oxnard. In addition, he says, randomized trials in EGFR and ALK show encouraging results in newer targeted therapies.

The search for new first-line and second-line treatments holds great promise for researchers and clinicians. The Addario Lung Cancer Medical Institute (ALCMI) in San Carlos, California, is collaborating with Champions Oncology and the ROS1ders, a group of patients with the ROS1 expression, on the Global ROS1 Initiative launched last year.

According to Guneet Walia, Ph.D., senior director of research and medical affairs for the Bonnie J. Addario Lung Cancer Foundation and ALCMI, the initiative has built an open data repository of ROS1-positive patients across seven cancer types in 19 countries. It is now building a bio repository of tumor tissue donated by the ROS1ders after biopsies and surgeries to help generate cancer models to identify new resistance mechanisms and drug targets.

With the advent of precision medicine, Walia says, patient populations in each molecular subtype — EGFR, ALK, ROS1 — get smaller, particularly considering second-, third- and further lines of therapy. “We need to rally resources to find these patients and study disease evolution,” she says. “That’s why we worked to identify patients from all over the world and bring them together under the Global ROS1 Initiative.”

The field has seen an explosion of advances in the past two to three years, Walia says, adding that because the EGFR and ALK patient populations are so much larger, people with ROS1 typically feel neglected in the development of targeted therapies.

“It’s so important to know the genetic makeup of your tumor so you get the right drug at the right time,” Walia says. In addition to getting molecular testing upfront, it’s important to get testing at each NSCLC cancer progression, she says: “Cancer always finds a way to grow and evolve, despite therapy. Getting another biopsy and round of molecular testing can tell you if your drivers have evolved.”

Molecular testing can take a while for some patients because their biopsy may have been done elsewhere or there may not be enough tissue left, Oxnard says. That may change with the development of liquid biopsies, which allow medical experts to examine blood for free-floating DNA.

“Things are rapidly changing,” Patel says. “These incremental gains add up to leaps forward in our treatment of lung cancer. We’re learning how to outwit cancer and how to develop drugs that have long-lasting efficacy.”